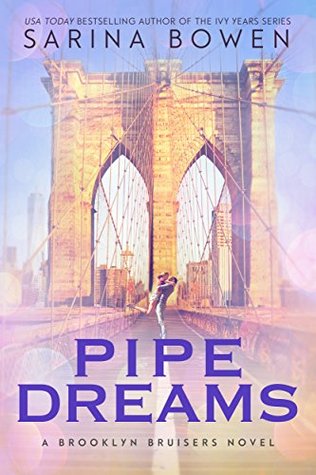 A great goalie always makes the save, even when he’s taken a shot to the heart…

Mike Beacon is a champion at guarding the net, but off the ice, he’s not so lucky. A widower and a single father, he’s never gotten over Lauren Williams, the ex who gave him the best year of his life. When Lauren reappears in the Bruisers’ office during the play-offs, Beacon sees his chance to make things right.

Lauren hates traveling with the team she used to manage and with the man who broke her heart. There’s still undeniable sexual tension running between her and Mike, but she won’t go there again. She’s focused on her plans for the future—she doesn’t need a man to make her dreams of motherhood come true.

Lauren plays her best defensive game, but she’s no match for the dark-eyed goalie. When the field of play moves to Florida, things heat up on the beach.

Only one of Mike’s fans doesn’t approve—his teenage daughter. But a true competitor knows not to waste the perfect shot at love.

I really enjoyed Pipe Dreams as I was reading it but now that it has been a couple days since I read it I have a few problems with it. Does that happen with anyone else? Pipe Dreams is the third book in the Brooklyn Bruisers series and is yet another rollercoaster of drama. It has a lot of different storylines going on that honestly still make me a little uncomfortable? This book is basically full of characters assuming things and absolutely no communication between the two main characters that is obviously a bit iffy. I’m going to try and keep this review short purely because I don’t want to go on and on too much. Now I’ve had time to think this book definitely didn’t deserve the four stars I originally gave it.

Pipe Dreams follows Lauren and the Brooklyn Bruisers goalie Mike Beacon. Mike and Lauren were a thing two years ago, just as Mike was going through a divorce with his high school sweetheart and mother of his daughter. It was messy as heck and created a lot of drama in the hockey community. However, around this time Mike’s ex was diagnosed with terminal cancer and was scaring their daughter, who was alone during the whole experience. Mike decided to leave Lauren without even so much as an explanation and race back to his family to help his ex and his daughter. Lauren was heartbroken and moved to the Manhattan part of the business by the owner so she could completely avoid Mike. However, circumstances have meant that she’s forced to come back to the hockey side and apparently the hurt that Mike had caused is easy to forget in the heat of the moment. The side plot in Pipe Dreams isn’t anything to write home about either, honestly, Lauren desperately wants to get pregnant and she chooses to go about artificial insemination to do so. Obviously, dramas arise there.

I had a lot of problems with Pipe Dreams. I initially enjoyed it. I have to remember that I am still young a lot of the time I read romance books so these situations that are arising are still realistic but just not something I will have experienced in my young life. However, a lot of my problems with Pipe Dreams came from the miscommunication that carried throughout the book.

It wasn’t just miscommunication though, it was simply the lack of communication. I felt as if the past that Lauren and Mike had should have been a larger obstacle as they battled with their feelings. However, it simply was resolved as quickly as it had been introduced which was more than a bit confusing. The feelings of mistrust, confusion, and hate that Lauren had shown in the past books simply disappeared and it was incredibly frustrating. I was like where is the depth to this relationship? Even with the flashbacks of the couple’s relationship when they first got together I wasn’t feeling the chemistry. It was just so damn lacklustre and I was even cringing during some parts.

I also felt as if there was just so much information dumped on us at one time. It was something I didn’t exactly expect since this is a romance book but it was incredibly messy. I guess I’m just not someone who enjoys second chance romances often due to this element typically being added.

Pipe Dreams by Sarina Bowen was also way too long. This book could have had fifty pages cut off it because it really dragged. The epilogue wasn’t even enjoyable because this book stretched out so damn long.

I’ve complained a lot but there were some things I liked about Pipe Dreams. Which must come as somewhat of a shock considering I just spent a lot of time complaining.

My favourite thing about this book had to be Mike Beacon’s daughter Elsa. I wish there was more of her in the book actually. I liked the fact that she was clearly a teenager dealing with the loss of her mother and trying to navigate the world without her. It was incredibly sweet. The girl also acted like a teenager. She was moody and she was not a fan of Lauren at all, something she wasn’t afraid of showing. I loved it.

There was an incredibly realistic representation of what it’s like to get your first period as well. This scene is between Lauren and Elsa, and obviously, that time in any young person’s life with a uterus can be quite traumatic. I know mine was considering I was home with only my stepfather who made it clear he hated me. I just really liked this scene.

The only other thing I can say I liked about this book was Mike himself, however, that is a lie now that I look back. I wrote down in my notes that I thought he was a sweet hero and I retract that hard.

Overall, Pipe Dreams by Sarina Bowen felt a bit all over the place. It definitely didn’t have the steam factor as the last book did and the side plot honestly was a snooze fest in comparison. I wouldn’t exactly recommend continuing this series, especially since as I’m writing this review I have already read book four and it was not good.

Do you like second chance romances? Tell me in the comments!