Thank you so much to the publisher for kindly gifting me an eARC of Red, White, & Royal Blue. Receiving a copy of this book did in no way impact my thoughts or feelings on the book. All opinions are my own.

First Son Alex Claremont-Diaz is the closest thing to a prince this side of the Atlantic. With his intrepid sister and the Veep’s genius granddaughter, they’re the White House Trio, a beautiful millennial marketing strategy for his mother, President Ellen Claremont. International socialite duties do have downsides—namely, when photos of a confrontation with his longtime nemesis Prince Henry at a royal wedding leak to the tabloids and threaten American/British relations.

The plan for damage control: staging a fake friendship between the First Son and the Prince. Alex is busy enough handling his mother’s bloodthirsty opponents and his own political ambitions without an uptight royal slowing him down. But beneath Henry’s Prince Charming veneer, there’s a soft-hearted eccentric with a dry sense of humor and more than one ghost haunting him.

As President Claremont kicks off her reelection bid, Alex finds himself hurtling into a secret relationship with Henry that could derail the campaign and upend two nations. And Henry throws everything into question for Alex, an impulsive, charming guy who thought he knew everything: What is worth the sacrifice? How do you do all the good you can do? And, most importantly, how will history remember you?

END_OF_DOCUMENT_TOKEN_TO_BE_REPLACED

Everyone knows Daisy Jones & The Six, but nobody knows the reason behind their split at the absolute height of their popularity . . . until now.

Daisy is a girl coming of age in L.A. in the late sixties, sneaking into clubs on the Sunset Strip, sleeping with rock stars, and dreaming of singing at the Whisky a Go Go. The sex and drugs are thrilling, but it’s the rock and roll she loves most. By the time she’s twenty, her voice is getting noticed, and she has the kind of heedless beauty that makes people do crazy things.

Also getting noticed is The Six, a band led by the brooding Billy Dunne. On the eve of their first tour, his girlfriend Camila finds out she’s pregnant, and with the pressure of impending fatherhood and fame, Billy goes a little wild on the road.

Daisy and Billy cross paths when a producer realizes that the key to supercharged success is to put the two together. What happens next will become the stuff of legend.

The making of that legend is chronicled in this riveting and unforgettable novel, written as an oral history of one of the biggest bands of the seventies. Taylor Jenkins Reid is a talented writer who takes her work to a new level with Daisy Jones & The Six, brilliantly capturing a place and time in an utterly distinctive voice.

END_OF_DOCUMENT_TOKEN_TO_BE_REPLACED

Thank you so much to the publisher for kindly gifting me an eARC of The Unhoneymooners by Christina Lauren. Receiving a copy of this book did in no way impact my thoughts or feelings on the book. All opinions are my own.

Olive is always unlucky: in her career, in love, in…well, everything. Her identical twin sister Amy, on the other hand, is probably the luckiest person in the world. Her meet-cute with her fiancé is something out of a romantic comedy (gag) and she’s managed to finance her entire wedding by winning a series of Internet contests (double gag). Worst of all, she’s forcing Olive to spend the day with her sworn enemy, Ethan, who just happens to be the best man.

Olive braces herself to get through 24 hours of wedding hell before she can return to her comfortable, unlucky life. But when the entire wedding party gets food poisoning from eating bad shellfish, the only people who aren’t affected are Olive and Ethan. And now there’s an all-expenses-paid honeymoon in Hawaii up for grabs.

Putting their mutual hatred aside for the sake of a free vacation, Olive and Ethan head for paradise, determined to avoid each other at all costs. But when Olive runs into her future boss, the little white lie she tells him is suddenly at risk to become a whole lot bigger. She and Ethan now have to pretend to be loving newlyweds, and her luck seems worse than ever. But the weird thing is that she doesn’t mind playing pretend. In fact, she feels kind of… lucky.

END_OF_DOCUMENT_TOKEN_TO_BE_REPLACED

Thank you so much to Hachette Australia for providing me with an unsolicited review copy of Devoted by Jennifer Mathieu. Receiving a copy of this book does not impact my thoughts or feelings on this book. All opinions are my own. 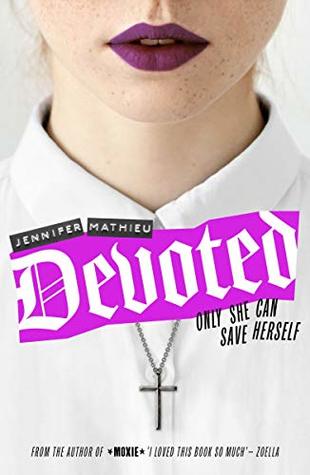 Rachel Walker’s family and community have turned away from the world.

Every part of Rachel’s life is controlled, from what she reads to where she goes and what she wears. Her parents dictate how her life must be: marriage, modesty, children and obedience to her future husband. But when a former member of her community, a girl who escaped, moves back to her small Texas town, Rachel’s world turns upside down.

She realises that her life is her own. But can she find the courage to fight for it?

END_OF_DOCUMENT_TOKEN_TO_BE_REPLACED

Thank you so much to the publisher for allowing me to read an eARC of Call It What You Want. Receiving the eARC did in no way impact my thoughts or feelings of the book. All opinions in this review are my own.

When his dad is caught embezzling funds from half the town, Rob goes from popular lacrosse player to social pariah. Even worse, his father’s failed suicide attempt leaves Rob and his mother responsible for his care.

Everyone thinks of Maegan as a typical overachiever, but she has a secret of her own after the pressure got to her last year. And when her sister comes home from college pregnant, keeping it from her parents might be more than she can handle.

When Rob and Maegan are paired together for a calculus project, they’re both reluctant to let anyone through the walls they’ve built. But when Maegan learns of Rob’s plan to fix the damage caused by his father, it could ruin more than their fragile new friendship…

This captivating, heartfelt novel asks the question: Is it okay to do something wrong for the right reasons?

END_OF_DOCUMENT_TOKEN_TO_BE_REPLACED

A magic passed down through generations . . .

Georgina Fernweh waits with growing impatience for the tingle of magic in her fingers—magic that has been passed down through every woman in her family. Her twin sister, Mary, already shows an ability to defy gravity. But with their eighteenth birthday looming at the end of this summer, Georgina fears her gift will never come.

An island where strange things happen . . .

No one on the island of By-the-Sea would ever call the Fernwehs what they really are, but if you need the odd bit of help—say, a sleeping aid concocted by moonlight—they are the ones to ask.

No one questions the weather, as moody and erratic as a summer storm.

No one questions the (allegedly) three-hundred-year-old bird who comes to roost on the island every year.

A summer that will become legend . . .

When tragedy strikes, what made the Fernweh women special suddenly casts them in suspicion. Over the course of her last summer on the island—a summer of storms, of love, of salt—Georgina will learn the truth about magic, in all its many forms.

END_OF_DOCUMENT_TOKEN_TO_BE_REPLACED

To be irrevocably in love with a vampire is both fantasy and nightmare woven into a dangerously heightened reality for Bella Swan. Pulled in one direction by her intense passion for Edward Cullen, and in another by her profound connection to werewolf Jacob Black, she has endured a tumultuous year of temptation, loss, and strife to reach the ultimate turning point. Her imminent choice to either join the dark but seductive world of immortals or to pursue a fully human life has become the thread from which the fates of two tribes hangs.

Now that Bella has made her decision, a startling chain of unprecedented events is about to unfold with potentially devastating and unfathomable, consequences. Just when the frayed strands of Bella’s life – first discovered in Twilight, then scattered and torn in New Moon and Eclipse – seem ready to heal and knit together, could they be destroyed… forever?